Sony has exposed its first wireless neckband speaker with Dolby Atmos support. The company says the SRS-NS7 offers “an immersive home theater experience” without the need for a surround sound speaker system or having headphones secured around your head.

For the full Dolby Atmos effect, you’ll need a Sony Bravia XR TV and the included wireless transmitter. After you hook up the adapter and pair it with the neckband over Bluetooth, you can use the 360 Spatial Sound Personalizer app to take a photo of your hearing. The app will guess the form of your ear and optimize the arrangement of virtual Dolby Atmos speakers for you.

The company says the transmitter likewise will minimise audio slow to precise match up the audio and portraits. You can buy the WL-ANS7 wireless transmitter separately and use it with some Sony headphones for the same effect. 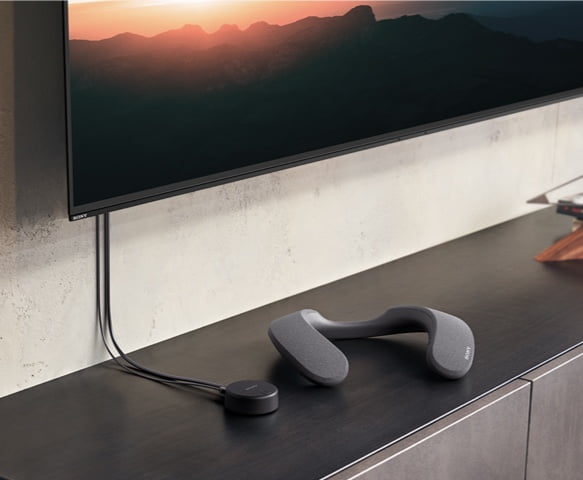 Along with watching their TV with the neckband, users can connect it to other manoeuvres. Pair the SRS-NS7 with a smartphone and you can listen to 360 Reality Audio from supported music streaming services such as Deezer and Tidal. Customers can attach the invention with a PC or tablet too.

Sony notations the flexibly designed SRS-NS7 includes multipoint linkage, symbolize it can link to two inventions simultaneously. So if you’re listening to music from your computer and a bawl comes in on your phone, you can answer with a press of a button and use the built-in microphone. In addition, the SRS-NS7 has an IPX4 rating, necessitating it’s splash-proof.

As for the battery life, you’ll get up to 12 hours of use out of a single bill, Sony says, and up to five hours of playback at maximum capacity. You’ll get up to an hour of use after 10 hours of charging.

The SRS-NS7 neckband costs $300 and the TV transmitter is $60. Pre-orders are open now and the devices will ship on October 27 th.